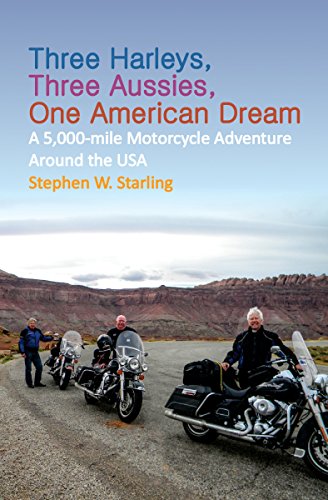 Buy the paperbackGet it on Kindle

“Three Harleys, Three Aussies, One American Dream puts you in the saddle for an exhilarating ride around the USA in search of the real America.
Join three Australian baby boomers racing down twisty back roads to explore magnificent national parks, experience the buzz of exciting cities, and soak up the atmosphere of famous attractions. Along the way you will meet a fascinating mix of characters, including backwoods trappers, devout Mormons, multimillionaires, and the fearsome bikers of the Harley Brotherhood.
This adventure brings to life the challenges of crossing snowbound mountain passes and burning deserts, and risking too many nights in slick city blues bars and rowdy country honky-tonks. The strains of hard traveling expose raw emotions between the three buddies, but these tensions dissolve in the reckless escapades that ultimately rebuild their bonds of friendship.
More than just a terrific traveller’s tale, the book reflects on the country’s tumultuous history and depicts the diversity of peoples and lifestyles in contemporary USA, and asks the question: Is the iconic American Dream fading?
Contains 10 Route Maps, Planning Itineraries, and 10 Descriptive Travelogues.”